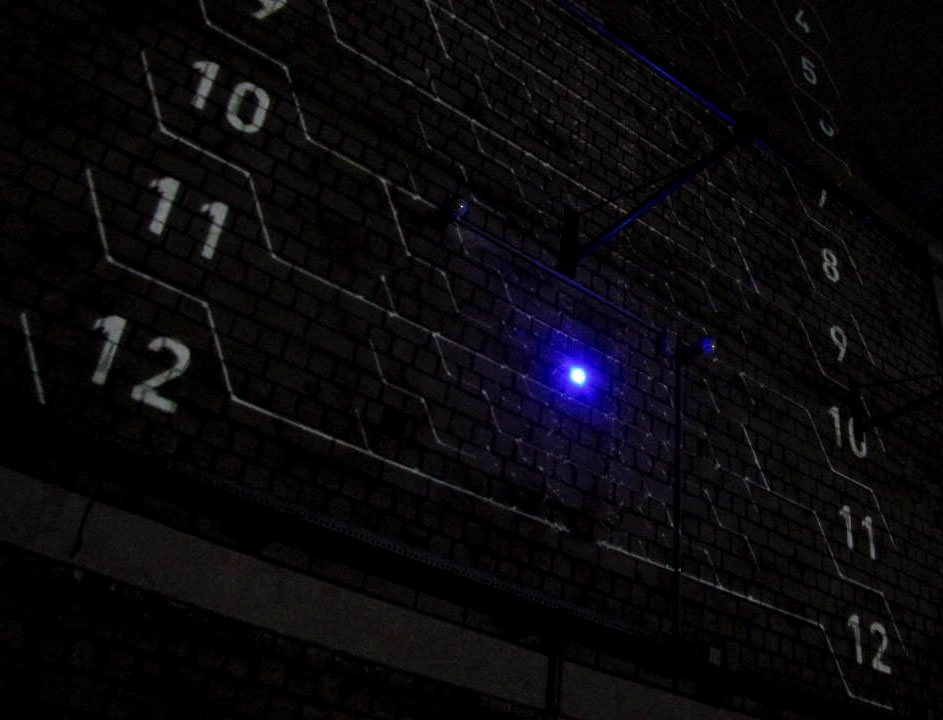 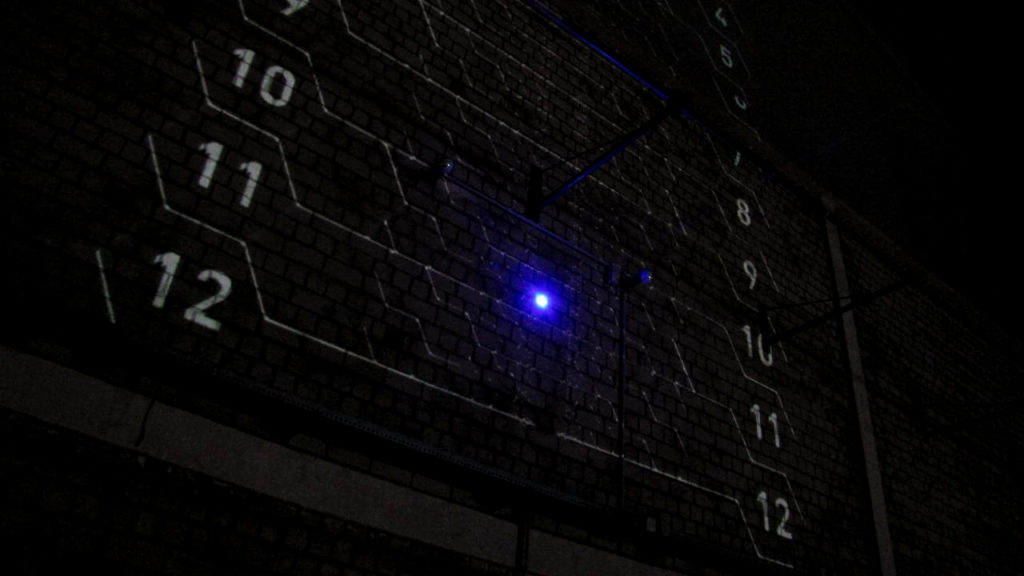 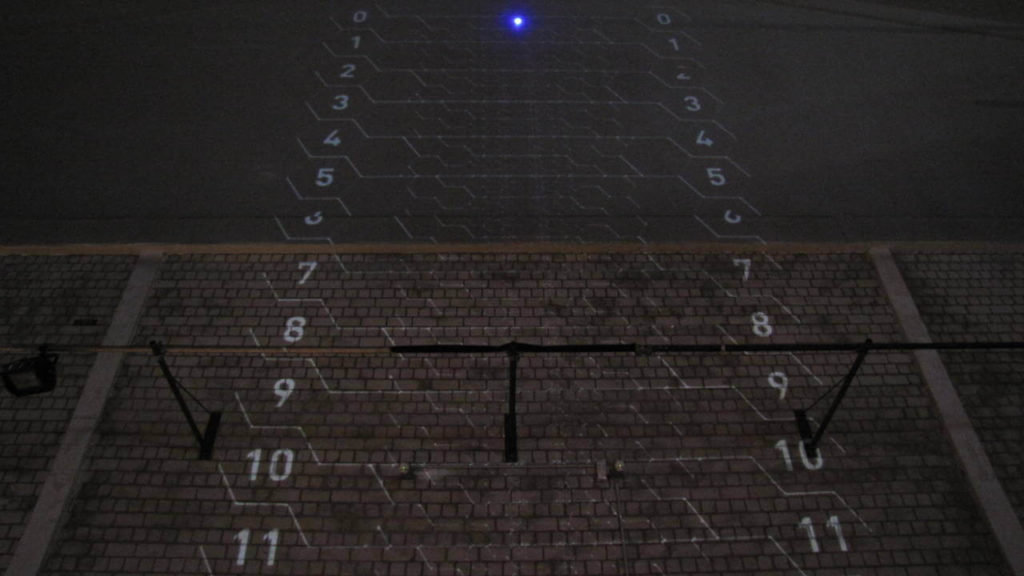 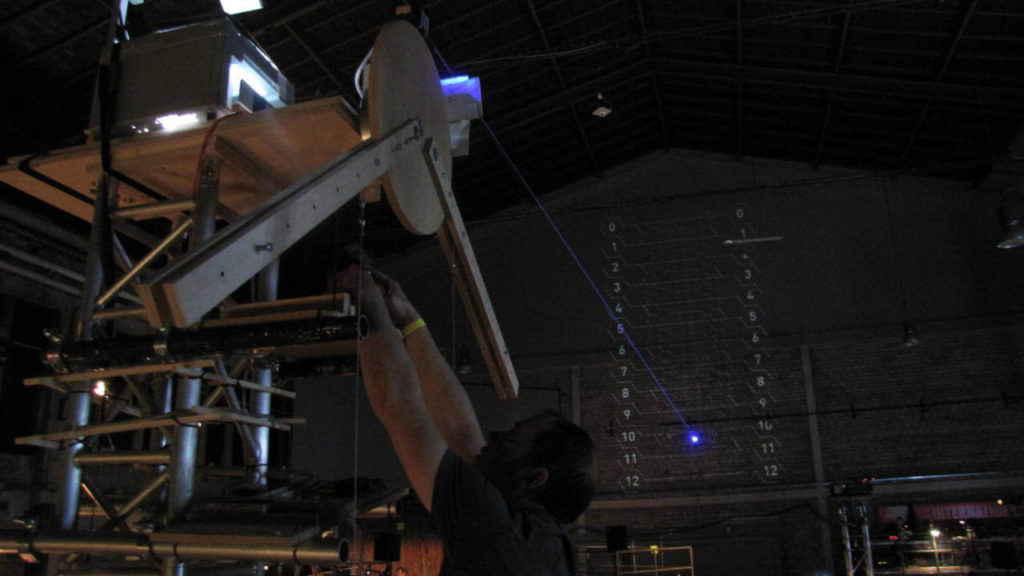 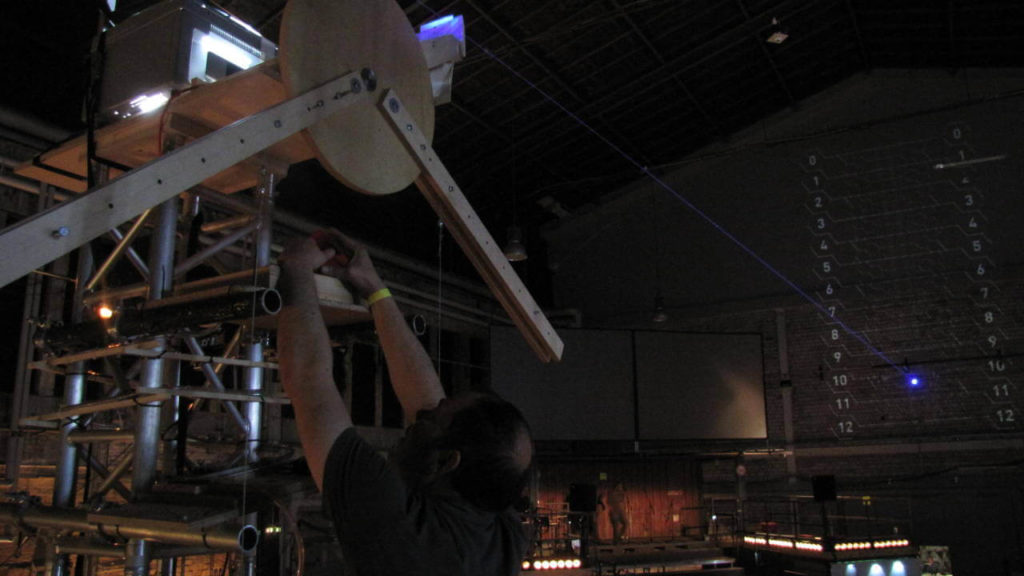 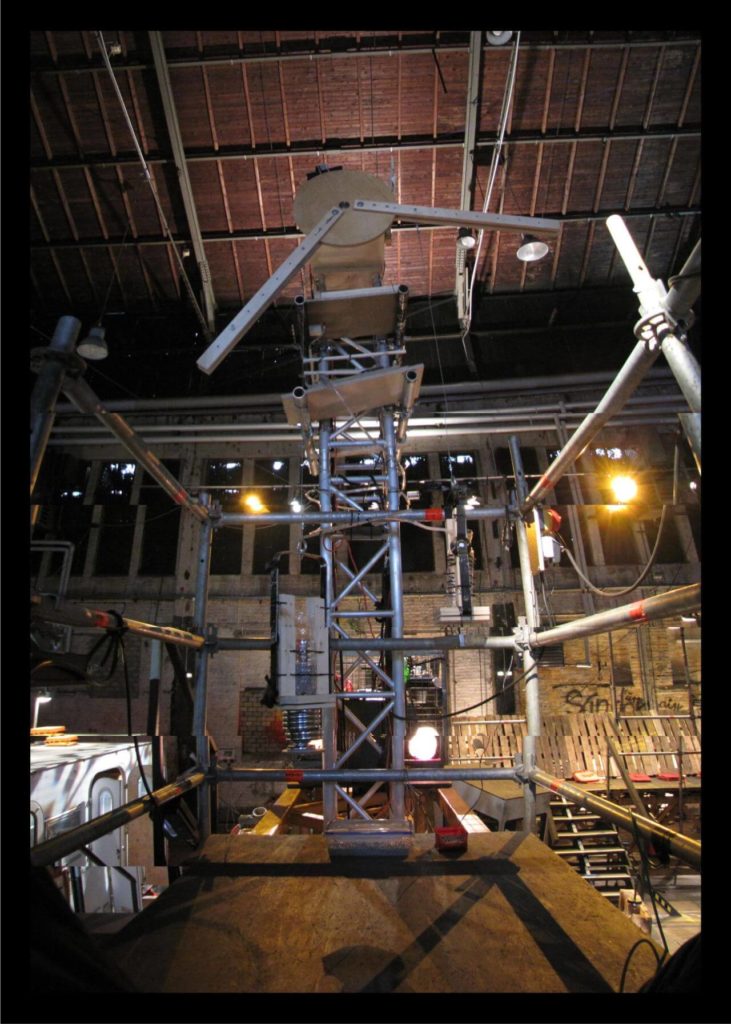 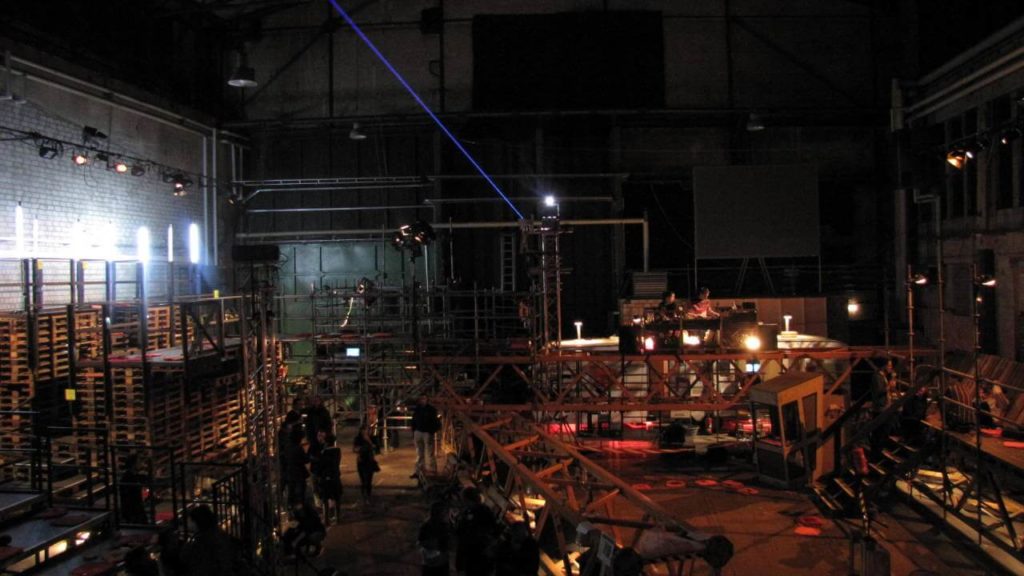 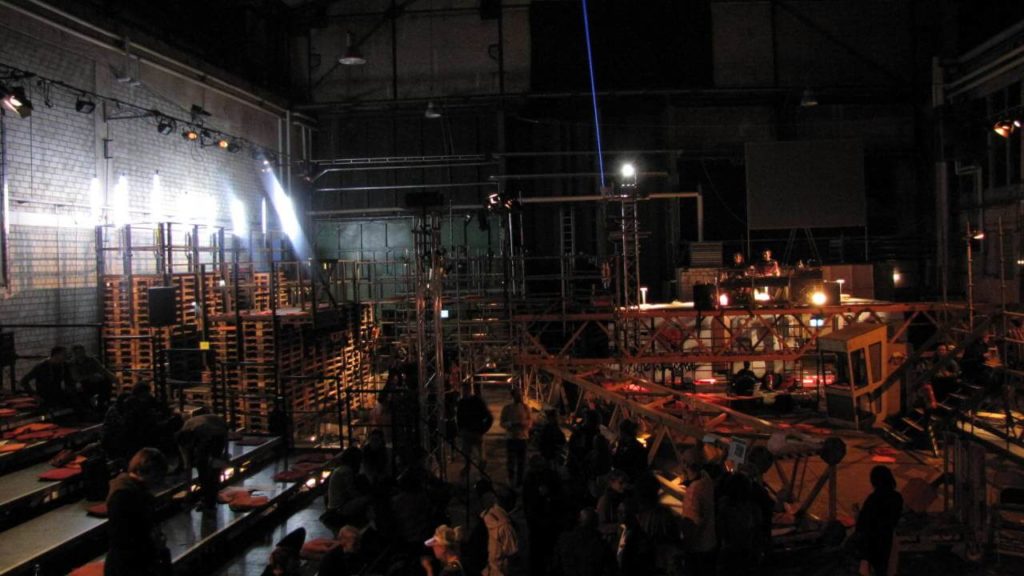 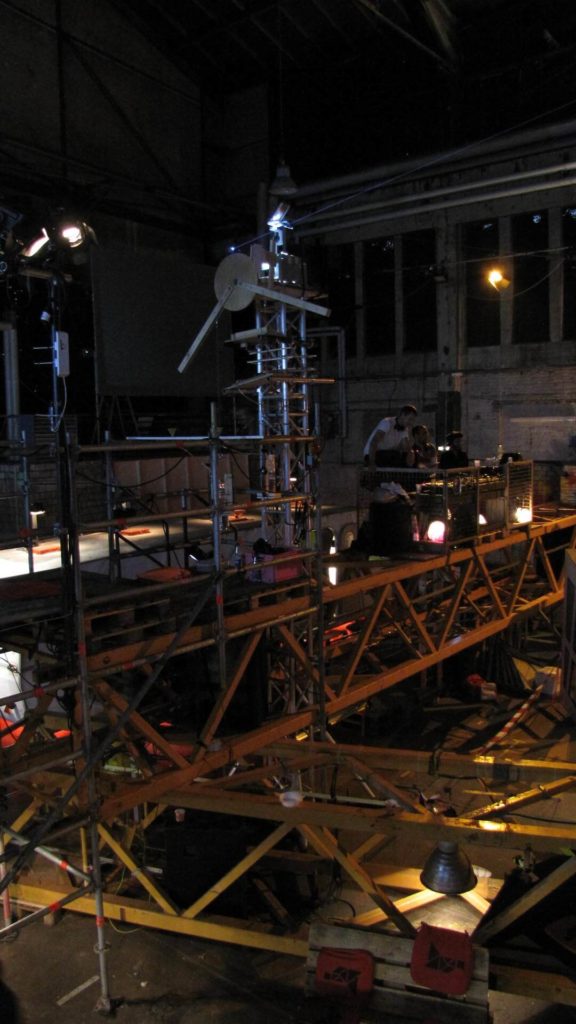 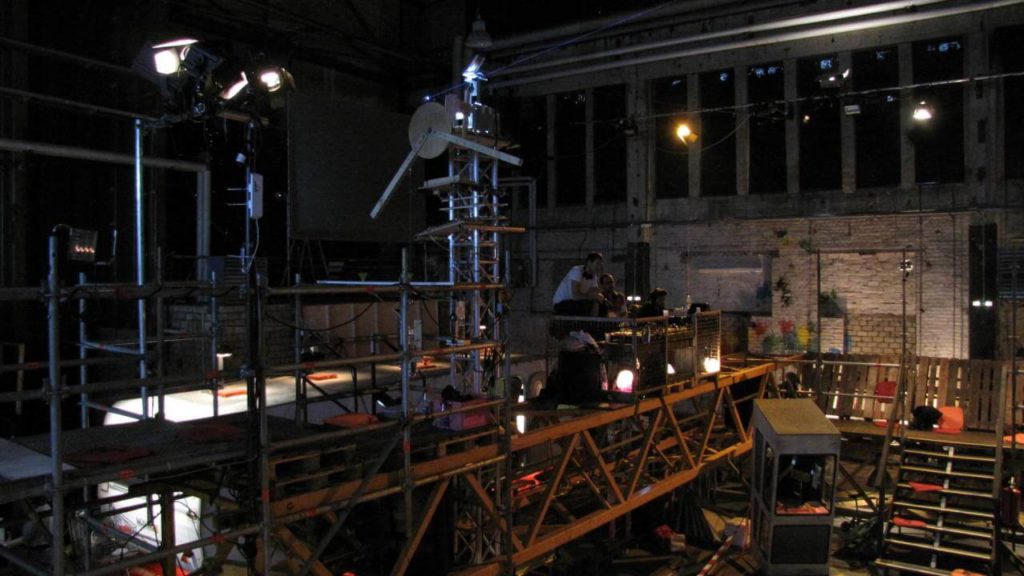 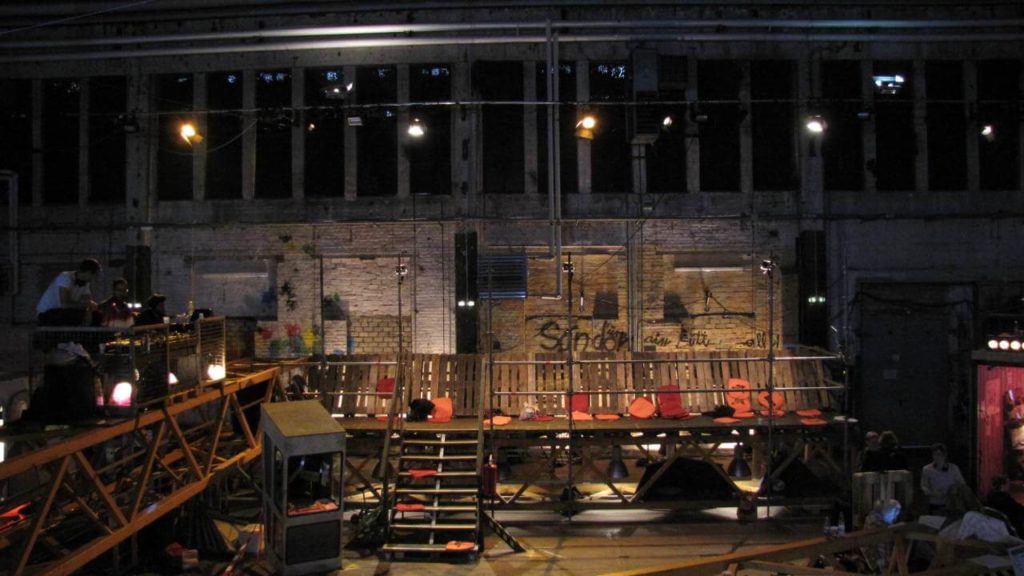 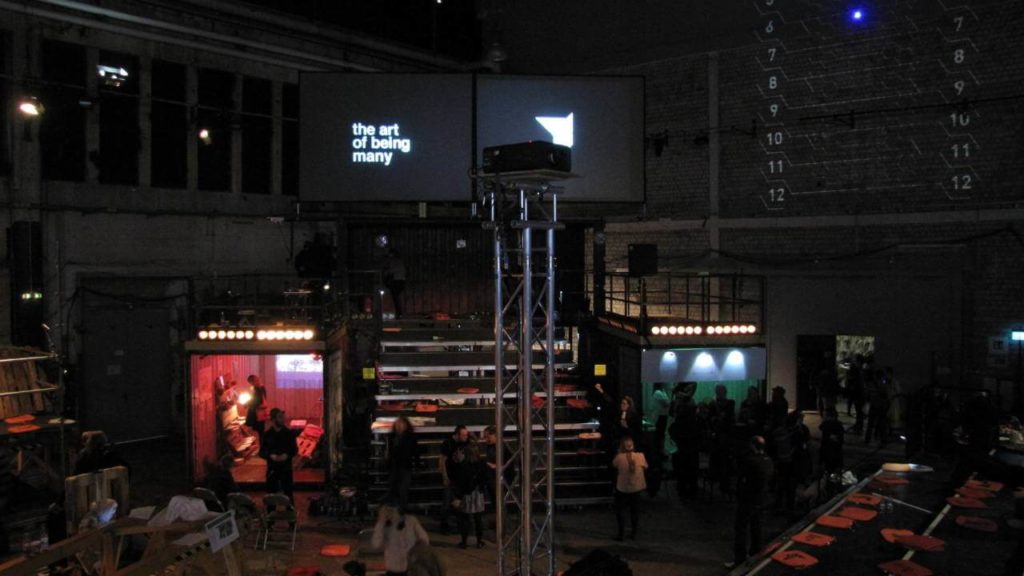 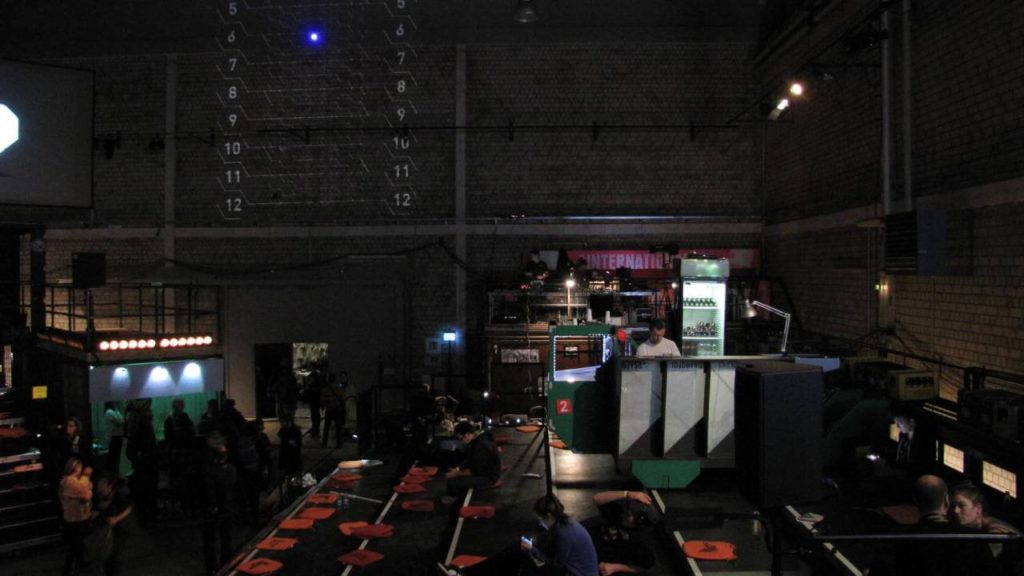 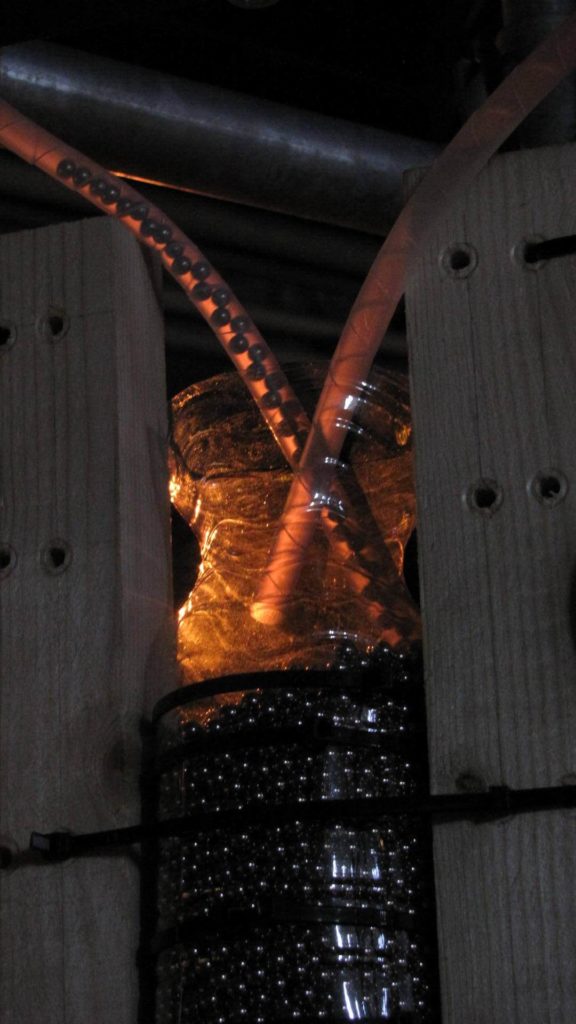 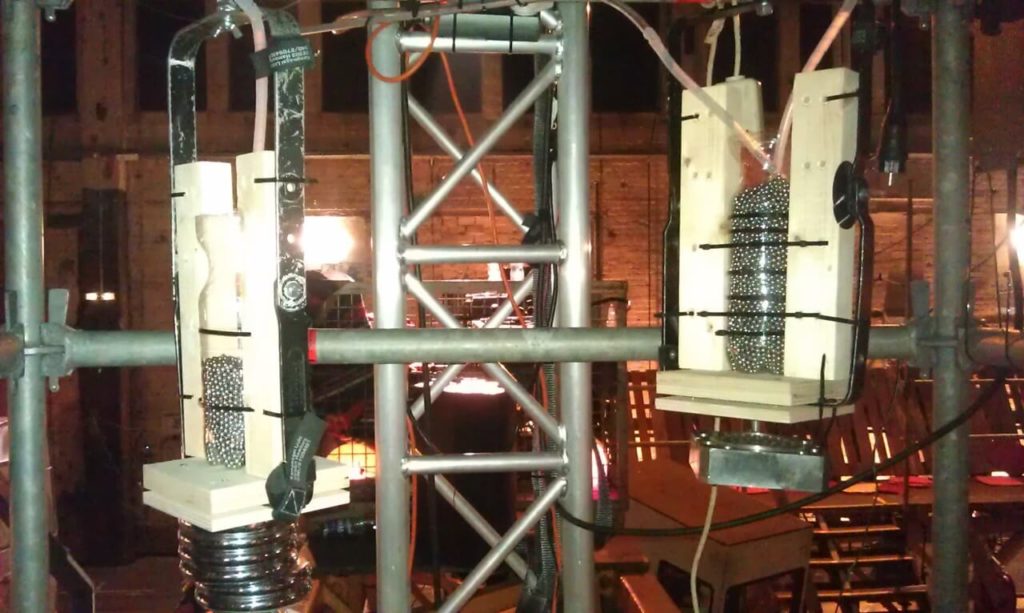 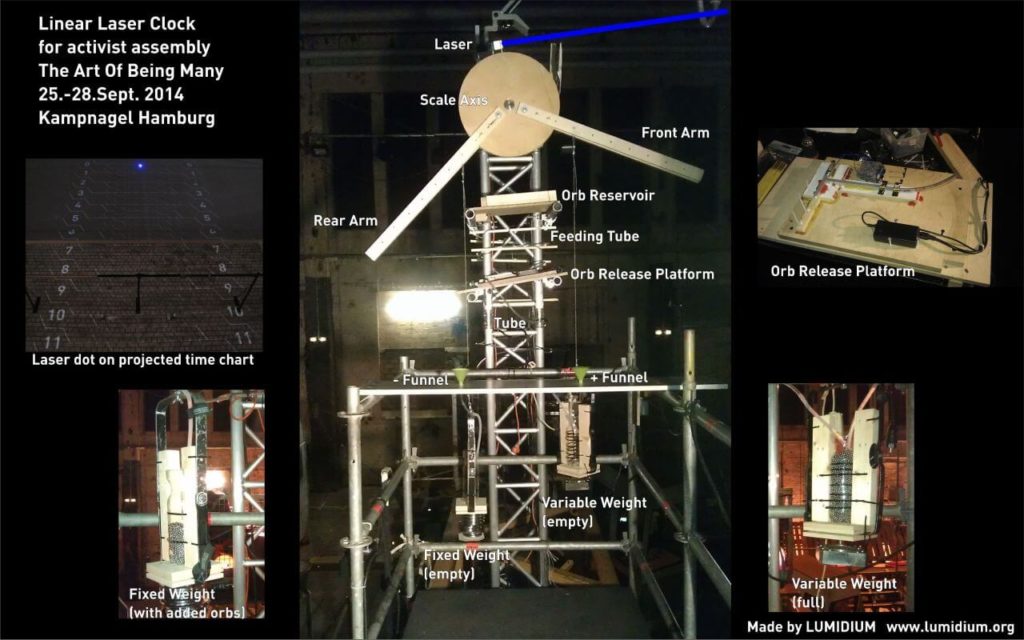 The laser clock that allows you to manipulate time!

An installation for the international activist assembly event “The Art Of Being Many”, 24.-28.9.2014 at Kampnagel in Hamburg. Watch a video here!

The main part of the machine is a pendulum scale with a fixed weight (rear arm) and a dynamic weight (front arm) mounted on top of a 5,5 m high trussing pylon. The weights area combination of metal plates and plastic vessels filled with steel orbs and are suspended by steel wires from the two arms of the scales. The arms are arranged in an angled manner to enable a stable equilibrium on the scale. A reference time-chart is projected on the wall by an overhead projector, a laser module (445 nm, 700 mW) is mounted on the top of the scale rotary element, beaming a laser dot on the wall in the time chart. The laser dot follows a linear vertical path crossing pitch lines indicating the time on the chart.   At the beginning of the Assembly-Day (12:00) the front weight plastic vessel is empty and the laser dot is on the 0 pitch line. A transparent tube spiraling around the pylon serves as a reservoir underneath the scale rotary axis and holds around 1000 steel bearing orbs (6 mm diameter). The tube ends on a pipe opening which feeds the orbs into the release mechanism. When the machine is started a steel bearing orb is released every 7 seconds by an arduino-triggered solenoid (linear magnet) situated at the end of another pipe piece perpendicular to the feeding tube. The solenoid shoots the orbs trough the pipe into another tube spiraling downwards around the pylon and is finally led by a piece of cable conduit into the front weight vessel. Through this mechanism, the front weight increases continuously, gradually inclining the scale structure around the axis. This results in linear movement of the laser dot vertically through the time chart on the wall. By the end of 12 hours over 6000 steel bearing orbs have been released and the laser dot is at the 12 hour pitch line. The exact number of orbs is determined by calibration prior to operation of the clock.

This is the standard time advancement mechanism.

And a loser view of the projected time chart near the end and at the beginning of the day. The chart was about 12 m in height starting at about 6 m above the ground – quite a large sized indoor wall, eh?. Regularily, the reservoir had to be refilled by hand onto the upper platform – not a single orb was spilled despite only limited space available to handle the material. And a pretty badly stiched panorama picture of the thing…

As well as a general overview of the installation and the environment of the location – great arrangement of massive structures, giving space for assemblies, presentations and performances, also providing a little bar on the steps. Detailed view of the weights and vessels at the end of the day where forward weight (right) vessel is full (6000 orbs plus those added by the participants).

Also worth checking out is the soundtrack to the event:

This project would not have been possible without the crucial help of Sybille, Flo, Matthias, Michael, Thomas, Jan, Jaap, Holger, Claas, Ralf, Arved, Anja, just to name the most important – thanks for your help!

More links from the context of this project: 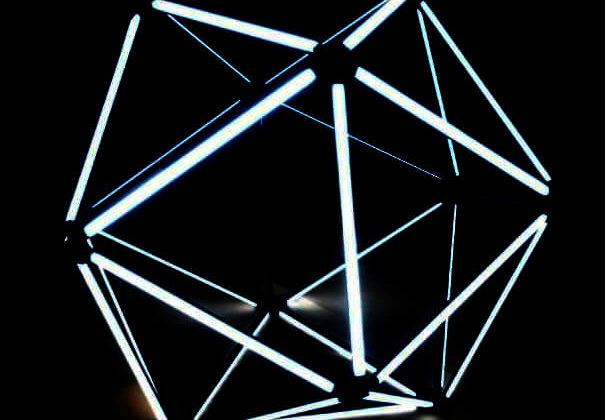 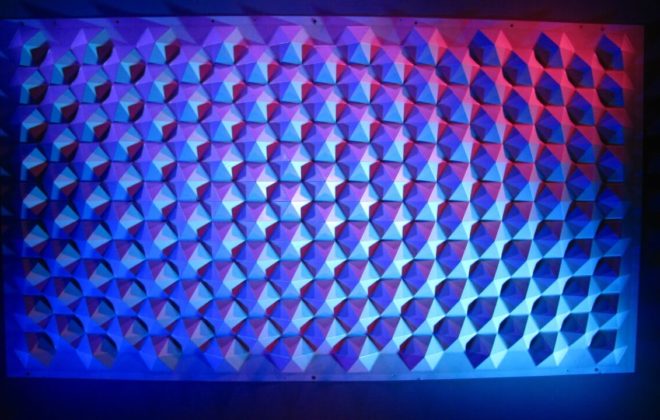 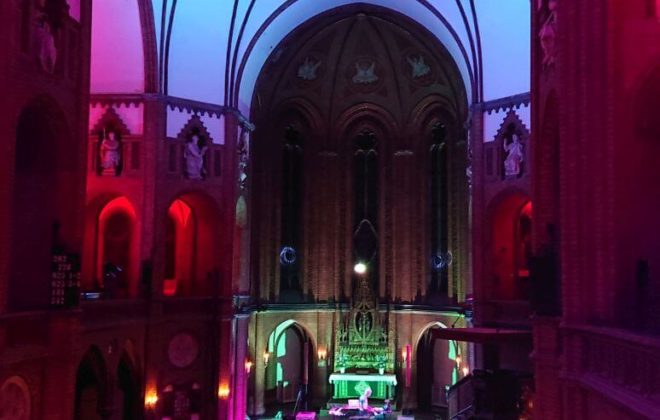 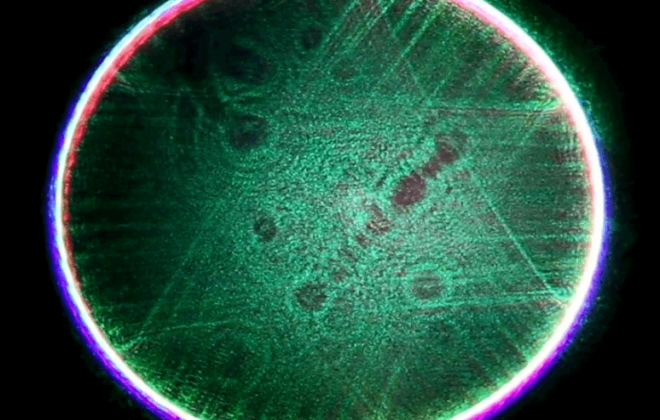